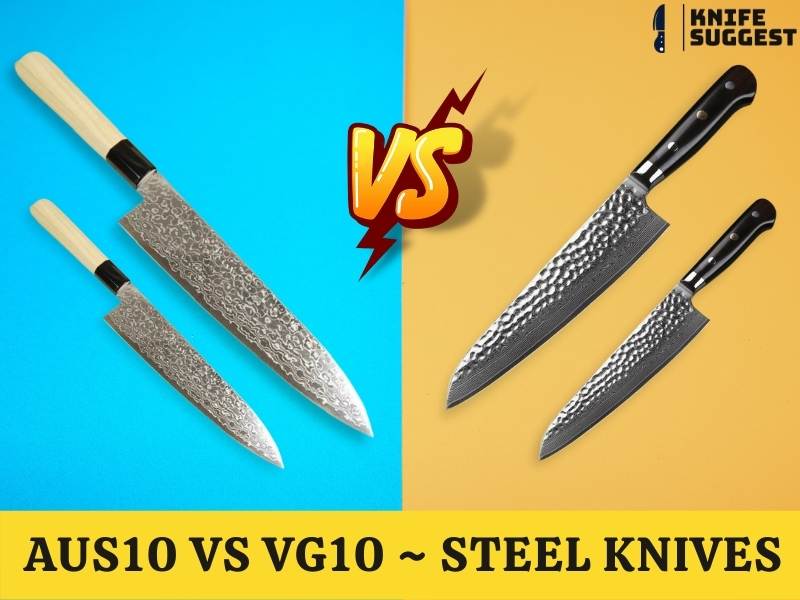 If you are a knife freak, you should know about the steel types used for knife manufacturing. So, with that in mind, you’re probably aware that Japanese steel is one of the most well-known steels for knife production. The main reason Japanese knives are so famous is that they use quality AUS10 or VG10 steels to craft their blades. These steels are long-lasting and stain-resistant. However, there are significant differences between AUS10 and VG10.  In other words, to discover the ideal steel, you must first distinguish between AUS10 Vs VG10. Before purchasing the best blade, consider various criteria.

But first, let’s look at the characteristics of AUS10 and VG10 steel.

What is AUS10 Steel?

AUS10 is a type of steel produced by Aichi steel. It’s from the Japanese city of Tokai and one of the most substantial types within the AUS series. It was not well recognized previously, but it has recently gained prominence due to its use in the majority of imported Japanese knives.

VG10, often known as Takefu VG 10, is a premium Japanese stainless steel. VG-10 is a step up from VG-1, its parent steel. Just like the AUS10 steel, the VG10 also features carbon and Vanadium. It is one of Japan’s most popular steels, and it’s manufactured by Takefu, a Special Steel Corporation based in Fukui, Japan.

Professional Japanese knife users and chefs typically prefer blades manufactured from VG10, as it has a strong and balanced feel that results in precise cuts.

Also, VG10 includes common and non-ferrous alloys. Therefore, the blade is simpler to sharpen and retains its sharpness for a long time.

So, What Are the Impacts of These Chemical Materials on Aus10 and Vg10 Steel? 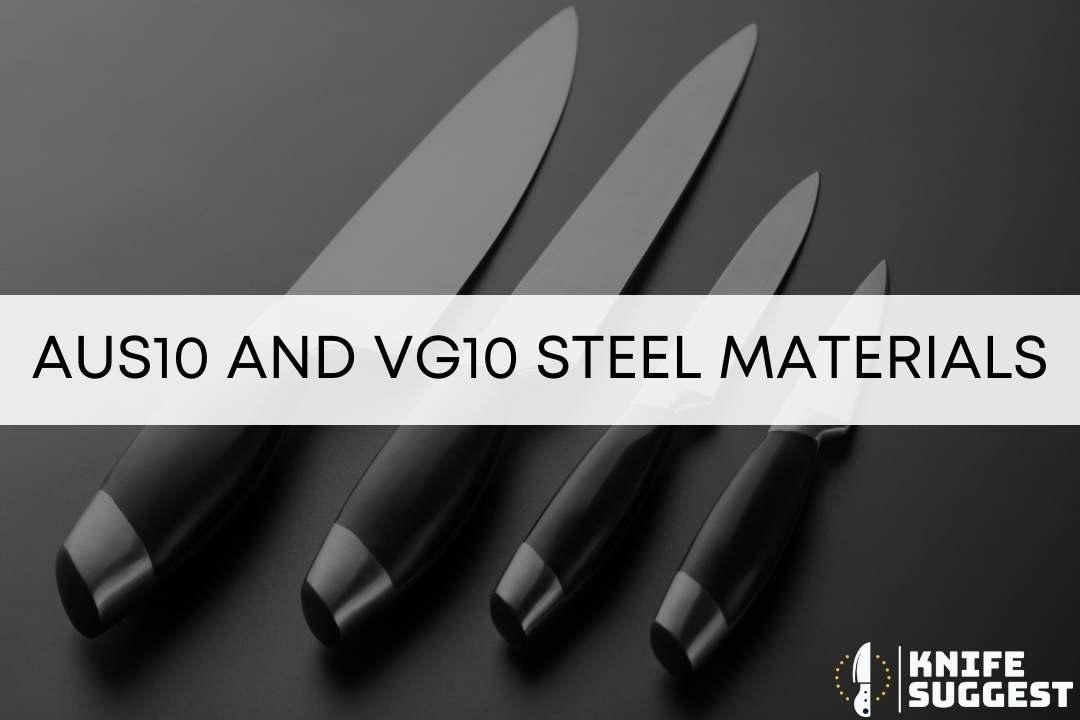 Carbon helps to increase edge retention, hardness as well as tensile strength. It also increases the resilience of steel to wear, abrasion, and corrosion. So, with high carbon content, both AUS10 and VG10 steel include all of these features in your knife.

Chromium is a very crucial metal in any steel. It’s because a steel grade must have at least 10.5 percent chromium and less than 1.2 percent carbon to be categorized as stainless steel.

Moreover, a standard amount of chromium content also enhances the blade’s hardness, tensile strength, and corrosion resistance characteristics. However, high levels of Chromium reduce the toughness of the steel in some cases.

Molybdenum further strengthens the metal by increasing its hardness. It also aids in the retention of steel strength when subjected to high temperatures, making the metal smoother to produce, harden, and handle.

Nickel also boosts the strength and toughness of the metal. Moreover, it assists in the preservation of steel strength when treated at low temperatures.

Silicon basically strengthens and enhances the hardenability of the steel, making it easier to produce.

Manganese also helps to boost the hardenability and wear resistance of the steel.

Phosphorous improves the strength and machinability of steel.

Sulfur also improves the steel’s strength. However, a high concentration of sulfur is viewed as an impurity in the metal.

Cobalt amplifies the individual effects of other elements in complex metals. Also, it’s not a carbide form. 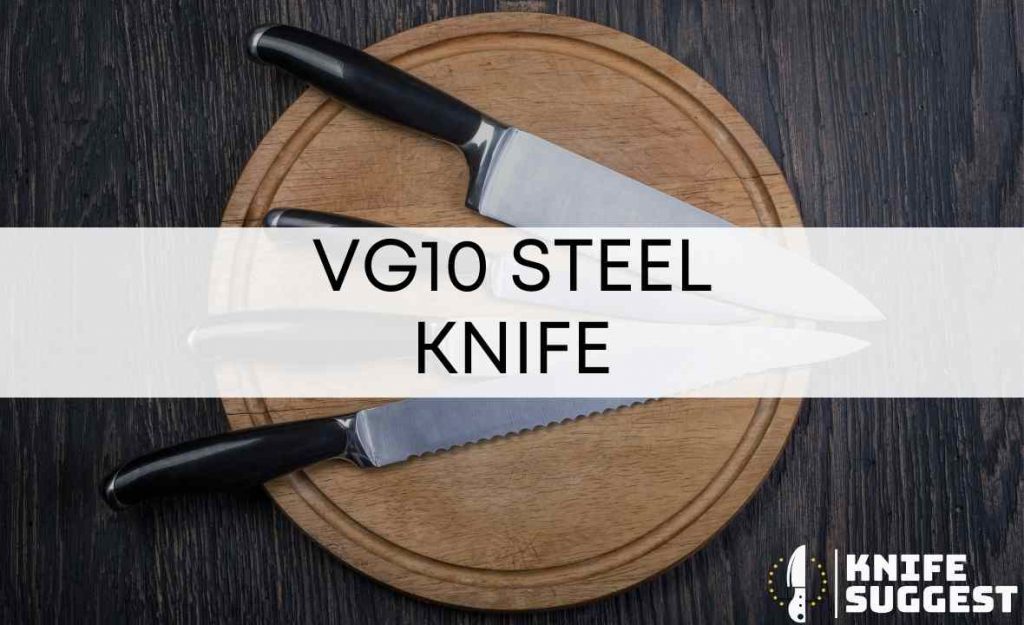 AUS10 steel is up to the mark in terms of hardness. This steel’s high carbon content makes it hard, with a Rockwell hardness rating of 58- 60 on the Rockwell scale. So, you can see why it’s gaining recognition among knife enthusiasts.

In the case of sharpness, it makes the knives very brittle, which is why a specific quantity of manganese, silicon, and Nickel have been added to the AUS-10 alloy to boost the material’s elasticity and flexibility.

AUS-10A has good toughness since its hardness is in the 58HRC region, and the addition of Nickel boosts its toughness even further.

Also, with its high hardness level, the AUS10A should be resistant to cracking and chipping. However, the steel is more likely to flex or distort instead of shattering.

AUS-10 steel alloy is highly refined due to its high percentage of carbon. Moreover, carbon and Vanadium in AUS10 steel allow the creation of strong fine carbides, which contribute to excellent edge retention. In other words, despite its reduced thickness, the edge will not be readily destroyed.

AUS10 steel has good corrosion resistance performance due to its unique mix of Chromium, Nickel, and Vanadium elements in a proper proportion.

This feature has the advantage of making maintenance easy for you. Low-chromium steel grades need specific handling and maintenance, making them difficult to work with.

AUS10, on the other hand, is not the finest corrosion-resistant material available. Vanax, 440A, and H1 have the highest corrosion resistance performance out there.

AUS-10 steel contains Molybdenum and Chromium in addition to Vanadium, which results in increased resistance to wear and tear. Here’s the fun fact: AUS-10 steel has more carbon and vanadium components than any other AUS series steel. Therefore, it is the hardest blade form in the AUS category.

AUS-10 steel’s increased hardness levels are obtained by adding a high carbon content of around 1.05 percent. It’s the primary reason why these knives may be readily sharpened to produce razor-sharp blades.

However, it also means that these blades will be excessively brittle. As a result, specialists combine silicon, manganese, and Nickel to make it more flexible.

The AUS10 performs admirably in terms of sharpness. It’s because blades manufactured with higher carbide steel are frequently sharper than knives built with lower carbide steel.

It should be noted that carbide is essentially a mixture of carbon and a few additional elements such as Nickel, Molybdenum, and chrome.

Knives constructed of AUS-10 stainless steel are very easy to sharpen and get a highly precise edge. Moreover, AUS-10 steel knives are resistant to corrosion and do not need to be sharpened on a regular basis.

Sharpening AUS-10 steel is simple and may be accomplished using several sharpening products.

Experts generally advise against using a pull-through sharpening on AUS-10 steel blades. However, you can use coarser sharpening stones for blades with higher carbides to sharpen AUS10 steel knives. 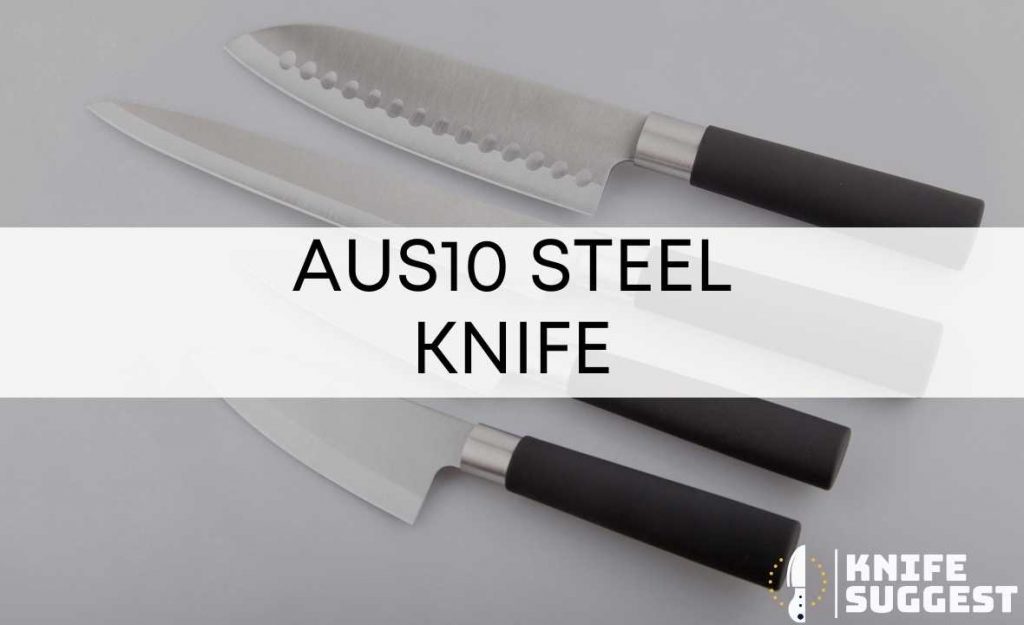 VG10 steel generally comes with a Rockwell hardness of 56 to 60 HRC. It depends on the type of heat treatment used while constructing this steel.

The utilization of components such as carbon, cobalt, and Vanadium contributes to Vg10’s extraordinary hardness.

Toughness refers to a knife’s ability to endure impacts and applications that might otherwise shatter or chip it.

However, it is good to know that a knife’s hardness doesn’t define how tough it is. The fact is, hardness and toughness are two difficult-to-achieve qualities of blades. Also, the higher the hardness, the lower the toughness.

In the case of VG10, you will get a high level of toughness despite its hardness. It’s because VG10 contains Molybdenum, which gives it a high toughness and strength.

The edge retention property of VG10 steel is exceptional. VG10 features Molybdenum, cobalt, Chromium, and carbon in its composition. Therefore, combining all these elements provides high edge retention functionality whether you use the VG10 blade frequently or not.

Just like the AUS10 steel, VG10 also features high levels of Chromium. Therefore, you will get a rust-resistant performance from VG10 blades. In other words, you can use your knife without concern of rusting in humid, damp, marine settings.

However, it’s not rustproof. Therefore, regular care and maintenance, such as cleaning and drying the blade after use, is obliged to ensure it’s rust-free.

VG10 steel is relatively easy to sharpen though it has high wear resistance characteristics. The reason behind this is its balanced chemical composition. So, it results in high hardness without making it too difficult to sharpen.

VG10 steel is not dishwasher safe. Dishwashing a stainless-steel knife can make it more prone to rusting and corrosion and reduce its functionality.

AUS10 Vs VG10 – The Major Differences 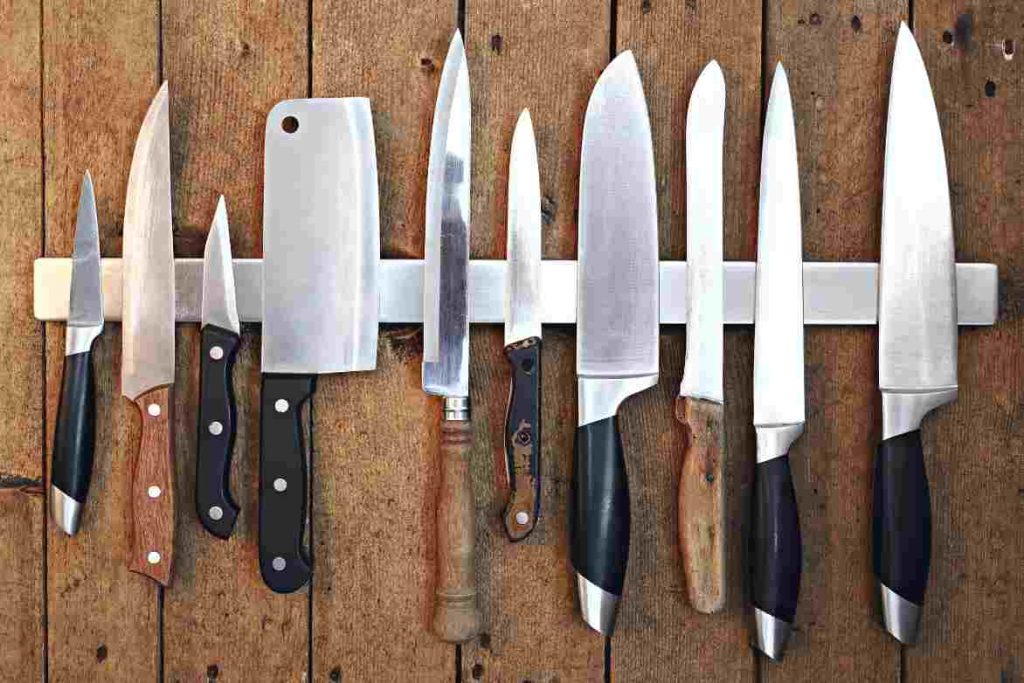 Until now, we’ve seen that the steel architectures of AUS10 and VG10 are very comparable. However, as we discuss AUS10 Vs VG10, we need to understand what factors make them different from each other.

Now, talking about different elements, VG-10 has a trace of cobalt, which improves the other alloying elements. AUS10, on the other hand, contains Nickel, Silicon, and Sulfur, which increases steel strength and toughness.

When it comes to AUS10 vs VG10, their steel is both high in carbon. However, VG-10 steel is a more superior and high-quality Japanese steel with qualities like hardness, edge retention, and corrosion resistance functionalities.

In terms of edge retention, VG10 steel is superior to AUS10 steel since it can keep its edge for a longer time span. Therefore, knives made of AUS 10 steel require frequent sharpening compared to VG10 steel.

In some cases, VG10 steel offers much better stain resistance capabilities than AUS10 steel. Though, both AUS10 and VG10 steel are high in Chromium content.

In terms of price, AUS10 steel is much more affordable compared to VG10 steel. Moreover, AUS10 is a bit tougher than VG10 steel. 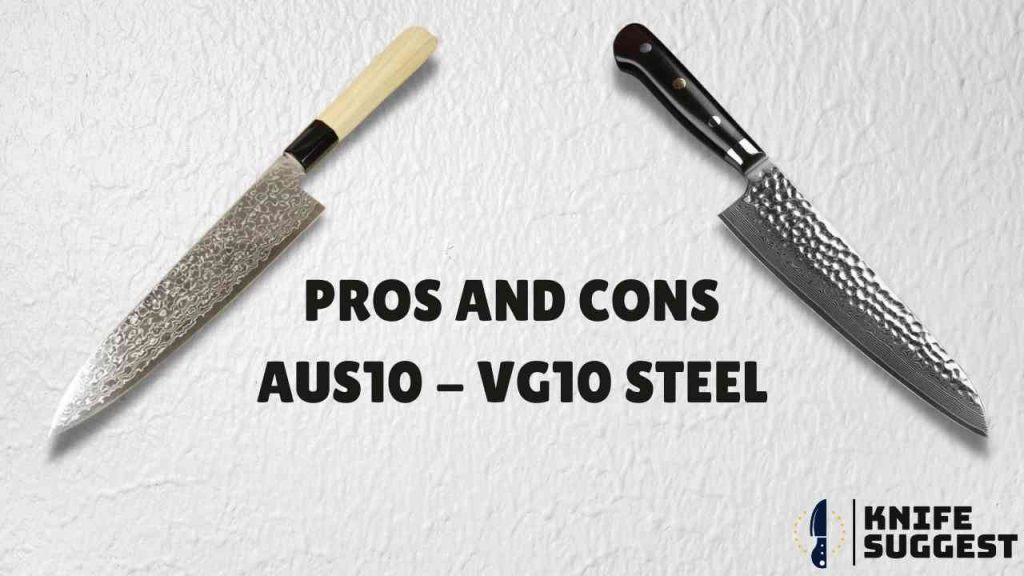 Let us now consider the benefits and drawbacks of both AUS10 and VG10 steel.

Other Steel Types and Their Differences 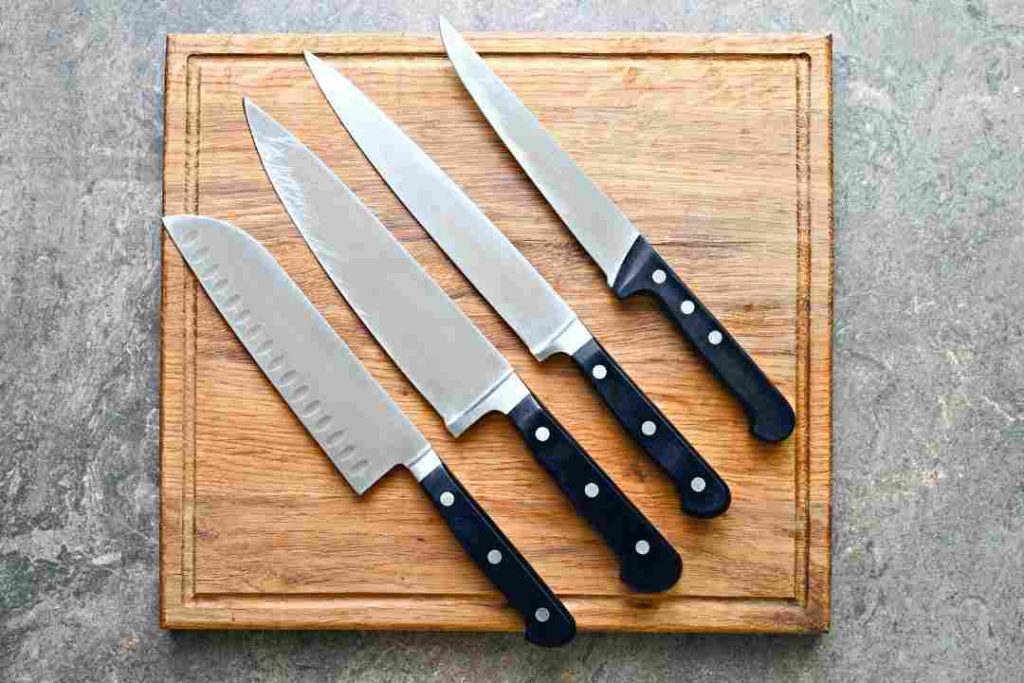 Aside from AUS10 vs VG10, other steel variants are utilized in knife manufacturing. The most well-known include Japanese steel, German steel, Blue steel, etc. So, in order to comprehend the kind of steel used in knives, let’s compare them briefly. 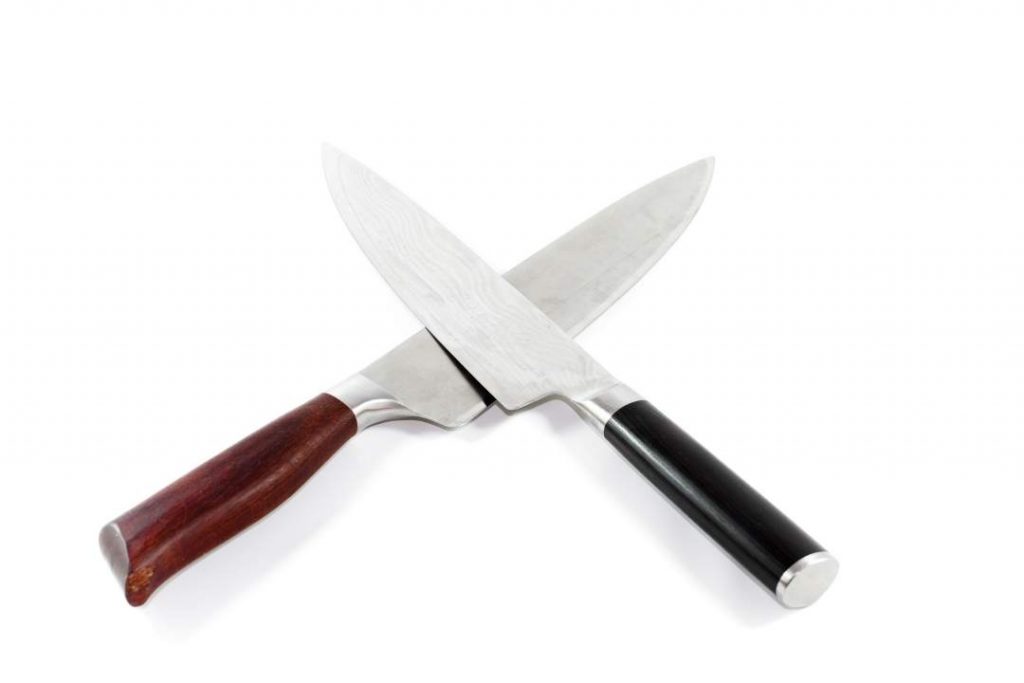 Japanese blades are narrower than German equivalents, allowing for a sharper edge — often in the 15–16 degree range, as opposed to 20 degrees in Western-type blades. 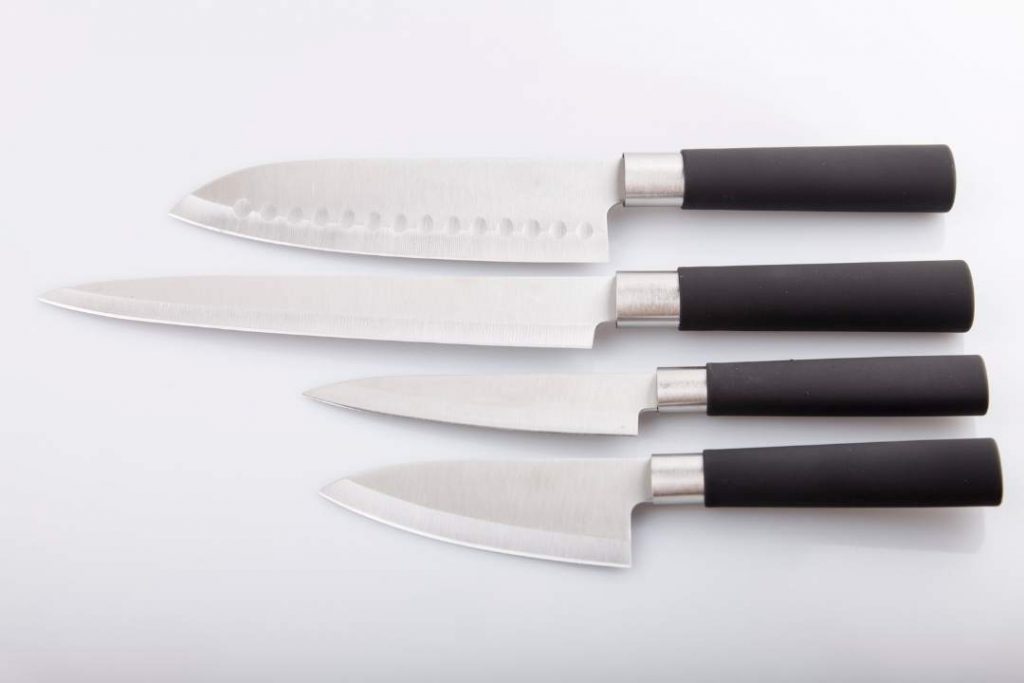 Blue steel contains tungsten and Chromium in addition to iron and carbon, resulting in an easier tempering process and a knife that retains its edge longer than white steel knives.

AUS-8 steel is a Japanese steel that is similar to 440 steel but has Vanadium added to increase hardness.

Now compared to AUS-10 steel, it offers more wear resistance ability than AUS-8 steel due to its increased carbon content. However, AUS-8 is a bit tougher due to the inclusion of more Nickel components in its alloy.

In terms of wear resistance, AUS10 and AUS8 both perform well as their alloys are almost identical.

Is Japanese steel the best?

Japanese steel is best in many ways. It features high carbon content and is durable. Also, Japanese steel can hold its super-sharp edge longer than stainless steel. The hardness of Japanese steel is 60-61 on the Rockwell scale. Therefore, it’s significantly more complex than other steel types.

However, there are strong competitors of Japanese steel like German steel and Blue steel. These steel types also have certain excellent properties that, in some situations, outperform Japanese steel.

What are the steel types used in knife making?

Tool steel, stainless steel, and carbon steel are the most common steels utilized in the production of knives.

Tool steel is a strong and robust material that can be alloyed to assure other critical features of the knife. Furthermore, its heat resistance is exceptional, making it a suitable material for the construction of a cutting tool.

Chromium is common in stainless steel and features corrosive resistant properties which is ideal for kitchen knives.

VG10 can be used as Damascus steel by placing the VG10 core between Damascus steel on both sides. Normally, Vg10 is stainless steel which is produced in Japan. You will find many VG10 Damascus steel knives that ensure the best quality and overall performance.

The kind of steel used to make a knife’s blade significantly impacts its performance. AUS10 and VG10 are two steel types that produce hardness, sharpness, and toughness, all of which determine a knife’s cutting ability.

In many ways, these two steel types are very similar. So, while deciding between AUS10 and VG10, it won’t make much of a difference. However, we found that VG10 was frequently recommended over AUS10 by many reviewers and knife forums. This is because VG10 blades outperform AUS10 blades in some sectors. 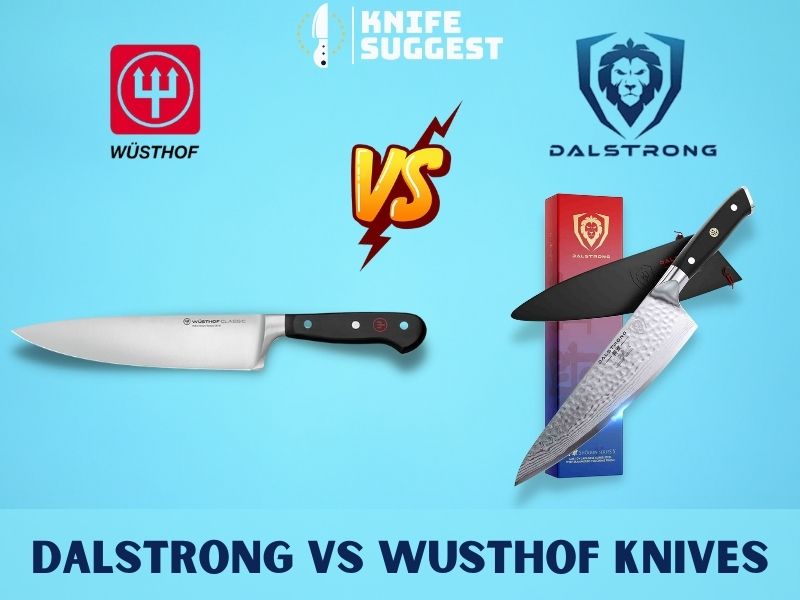 Dalstrong Vs Wusthof – Which One is the Best? 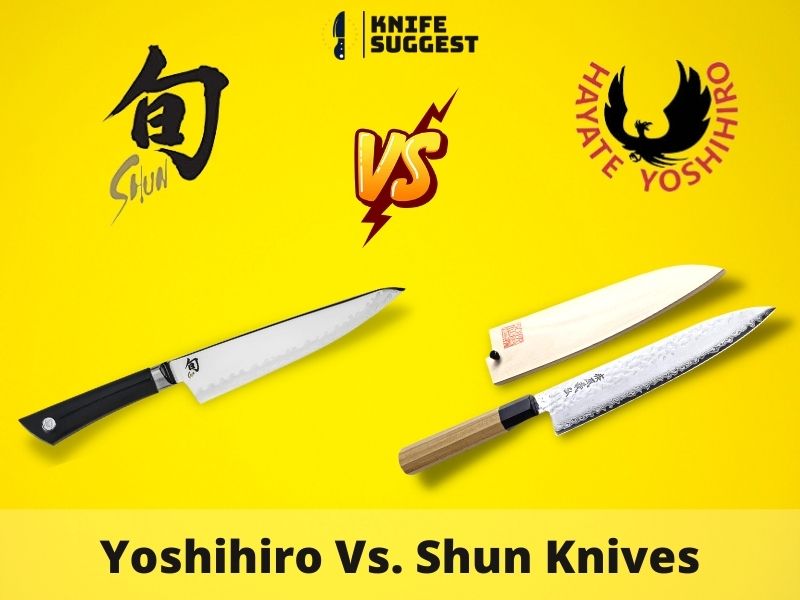 Yoshihiro Vs Shun – Find Out the Best Japanese Slicing Knife 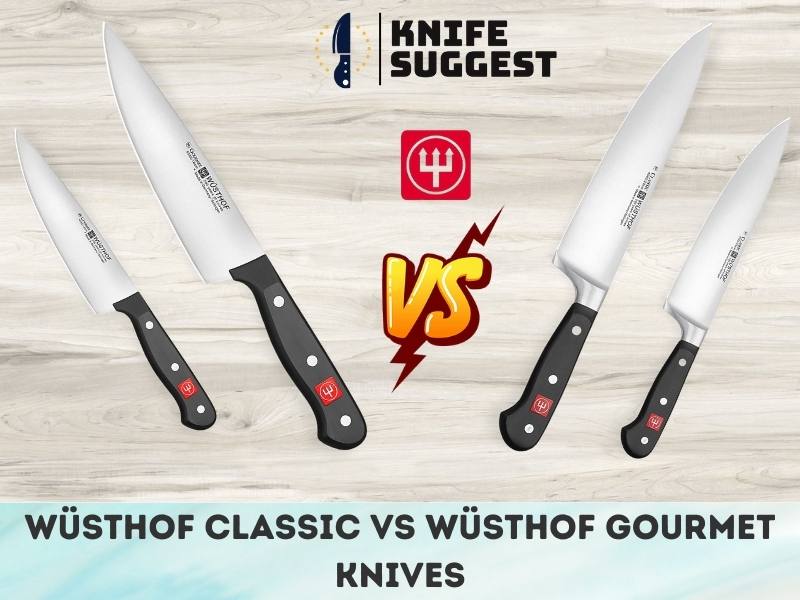 Wusthof Classic vs Gourmet Knives – Which One You Should Consider?